Welcome to Sew It With Love!

We are a creative sewing studio based in the heart of Waterloo, London just a stone’s throw away from the quirky shops and cafes of Lower Marsh and the buzzing Southbank. We offer small and friendly sewing courses and dressmaking classes as well as 1 to 1 tuition for different levels and abilities.

Whether you are a  beginner who has never used a sewing machine before, or an  intermediate  sewist who has tried their hand at a few sewing projects and want to improve and further your sewing skills, here you will find a selection of sewing classes suitable for different abilities and preferences!

Whatever your level and whatever you wish to learn you are in the best possible hands! Our tutors are very experienced fashion industry and sewing professionals who love passing on their amazing skills.

Here at Sew It With Love we are passionate about spreading awareness of  the garment making process, promoting slow fashion, contributing to reduced textile waste and helping you save a tonne of money! Our mission is to help you create unique clothes that fit and beautiful, inexpensive gifts and accessories, as well as to teach you to make the most of what you buy and of what you already have in your wardrobe. Just like our mothers and grandmothers used to do! Whatever sewing skills you may want to learn, we look forward to helping your sewing dream come true!

DISCOVER OUR SEWING CLASSES IN LONDON!

Sewing classes London evening,  Sewing courses for Beginners, One To One Sewing Tuition 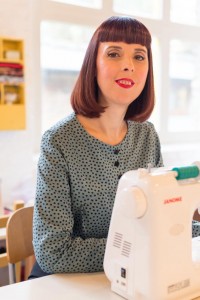 Elena PintusFounder, Creative Director and Sewing Tutor
I am a Fashion & Textile Designer and mother of one, with a passion for sharing the wonderful skills and arts of sewing and dressmaking. I started teaching myself dressmaking and experimenting with textiles from a very early age out of a burning desire to realize the designs in my head, which were hard to find in my hometown. I also wanted to wear unique clothes that nobody else would be wearing. After years of practising DIY dressmaking, I decided to take my skills to the next level and went onto train in Fashion & Textiles at London College of Fashion and London Metropolitan University, which were then followed by a spell working for designer label Tata Naka and 7 years as a freelance Designer/Maker specializing in bespoke designs.
I set up Sew it With Love in February 2013 out of a combined passion for sewing, dressmaking, textiles and teaching. I used to be a language teacher before training in fashion, and although I absolutely loved my new career, I missed teaching and the joy that passing on a valuable skills to others brings. So one day, whilst sitting at the sewing machine and nostalgically reminiscing about my teaching days, I decided I was going to combine the two together and Sew it With Love was created! ​

Passing on my sewing and dressmaking skills to others is proving to be a wonderful, exciting and very rewarding journey and I look forward to continue sharing it with all of our wonderful current and future clients.

Rehana graduated from Central Saint Martins with a BA in Fashion Design. It was alongside her studies where she honed her skills at fashion companies including All Saints, Matthew Williamson, Preen, Margaret Howell and Ozwald Boateng and during a spell at Savile Row where Rehana’s interest and skills in tailoring and pattern cutting really developed, parallel to her design abilities. She has since worked as a Designer for various London based fashion labels, has been part of the costume team on the Dancing On Ice TV show, and has worked as a dressmaking tutor both here and in Africa, where she was involved in empowerment projects teaching dressmaking. Rehana continues to freelance as a designer and tutor and thoroughly enjoys being hands on and sharing her love of sewing and pattern cutting with others.

After starting her career in Fine Art, Sasha moved to London to study Bespoke Tailoring with Newham College in Partnership with Savile Row Bespoke. After completing her tailoring training with spells at Timothy Everest, Alexander Boyds and as an apprentice of Marek Markowski she then moved into women’s couture and bridal, adding specialist handwork techniques such as lace and chiffon work to her skill base. After training to become a pattern cutter at BNV Couture in Kensington, Sasha then went on to set up her own women’s tailoring label Fishwife London, which she currently runs alongside teaching at Sew It With Love.

Sign up to our Newsletter and never miss our latest offers, new class releases and hottest sewing tips!

Your information will *never* be shared or sold to a 3rd party.